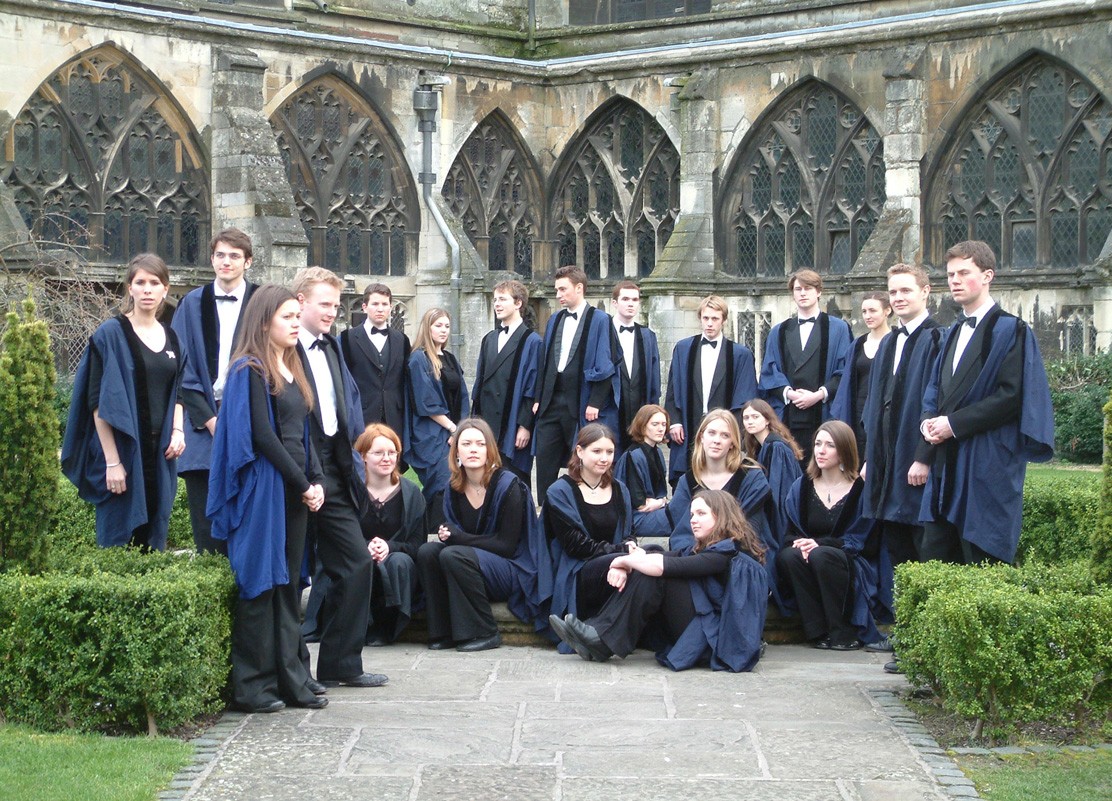 Caius (pronounced ‘Keys’) College Choir, Cambridge, is one of the UK’s leading collegiate choirs. The twenty-two singers and two organ scholars, under the direction of Geoffrey Webber, perform a wide range of sacred and secular choral music ranging from the fourteenth century to the present day. Alongside familiar repertoire from the Anglican choral tradition and beyond, the choir performs much new music and has developed a niche for reviving neglected repertoires.

The choir’s repertoire is based on the music it performs each week in the College Chapel for services of Choral Evensong and Holy Communion, and is also supplemented by more extended sacred works and secular music such as folksongs and madrigals. The choir is committed to contemporary music, and regularly commissions new works from composers such as Robin Holloway, James MacMillan and Gabriel Jackson. Opportunities are also given to young composers; one broadcast of Choral Evensong for BBC Radio 3 consisted entirely of music composed by students at Caius. The choir’s recordings have reflected this eclectic approach to choral repertoire. Traditional Anglican fare, such as a two-CD collection of the complete anthems of Charles Wood, is complemented by rarities such as the music of Samuel Wesley, William Child, Rebecca Clarke and Joseph Rheinberger, and the early choral works of Puccini and Janácek. The choir has made the first recording of the Bärenreiter edition of J. S. Bach’s St Mark Passion (including music by Keiser). Collaborative projects have included the Stabat Mater and Lenten motets of Francis Poulenc with the choirs of St John’s and Clare Colleges (on DVD), music by Robin Holloway with the choir of Clare College, and works by John Rutter with the choir of King’s College.

Caius College Choir travels extensively abroad performing at a variety of venues, ranging from major concert halls (Athens, San Francisco, Pretoria, Sofia) to universities (Yale, Bologna, Zürich, Johannesburg), major churches and Cathedrals (Florence, Copenhagen, Barcelona, Chicago, Rome, Dublin, New York), and also takes part in international choral music festivals. Some foreign trips have been arranged with professional groups, including appearances in Opera Northern Ireland’s production of Mozart’s Idomeneo, and performances of Handel’s oratorio Solomon with the Philharmonia Baroque Orchestra of San Francisco. The Choir also gives a number of concerts in the UK each year, making appearances in prestigious festivals such as the Spitalfields Festival in London, and performing in churches, schools and halls around the country.

Caius Choir features regularly on national radio and television. Broadcasts of Choral Evensong on BBC Radio 3 have been notably adventurous in content and have included Russian and Greek Orthodox music, pre-Reformation English music, baroque anthems performed with period instruments, and music from South Africa sung partly with a Zulu township choir, broadcast from Pietermaritzburg Cathedral. Other BBC work has included a radio recording of Schubert’s Mass in A flat with the choir of St John’s College and the BBC Philharmonic Orchestra, and a live relay of Radio 4’s Sunday Worship programme. The choir has also appeared on television programmes on BBC 1, BBC 2, Channel 4 and the BBC World Service, and on several foreign networks.

Geoffrey Webber began his musical education as a chorister at Salisbury Cathedral, and after being Music Scholar at The King’s School, Worcester he was elected to an Organ Scholarship at New College, Oxford, in 1977. At Oxford his academic tutors and organ teachers included Edward Higginbottom, John Caldwell, James Dalton, Nicholas Danby and Gillian Weir. After graduating with a First he remained in Oxford to pursue research into German church music of the seventeenth century, combining this with activities as an organist and conductor. He served as Acting Organist at both New College and Magdalen College, and was appointed as Assisting Organist at Magdalen College in 1982 and University Organist and Director of Music at the University Church in 1984. During this time he also became Director of the Edington Festival, a festival of music within the liturgy at Edington, Wiltshire.

After completing his doctorate in 1989 he was appointed Precentor and Director of Music at Gonville & Caius College, Cambridge, and he now also serves as an Affiliated Lecturer in the Faculty of Music, dividing his time between conducting, organ playing, lecturing, teaching, editing and research projects. He is a committee member for the Royal College of Organists and the Church Music Society, and his publications include North German Church Music in the Age of Buxtehude (OUP, 1996), and as co-editor, the Cambridge Companion to the Organ (CUP, 1998), and The Restoration Anthem (CMS/OUP, 2003-).

"Their singing is, in short, a delight"

"Such poise and technical control from a college choir, with its constant turnover of undergraduate voices, is remarkable"
BBC Music Magazine

Who can say whether these interpretations of chants and hymns from the early Celtic church are authentic, but they have been done with intelligence, musicality and enthusiasm. Columba is best known today for helping spread Christianity from Ireland to Scotland, and for founding a monastery at Iona. The music here, associated with this early Irish saint but drawn variously from the seventh, 10th and 14th centuries, has been prepared by Barnaby Brown in collaboration with Geoffrey Webber and his formidable choir. They give a bracing vigour and unusual freedom to this ancient music. Detailed programme notes provide an essential guide, and are worth reading as you listen. Fiona Maddocks, The Observer, 6th July.

‘What all this adds up to is a “new” choral repertoire – a sound world liberated from the drab modern conception of plainsong'. Andrew Clark,The Financial Times, 1st August.