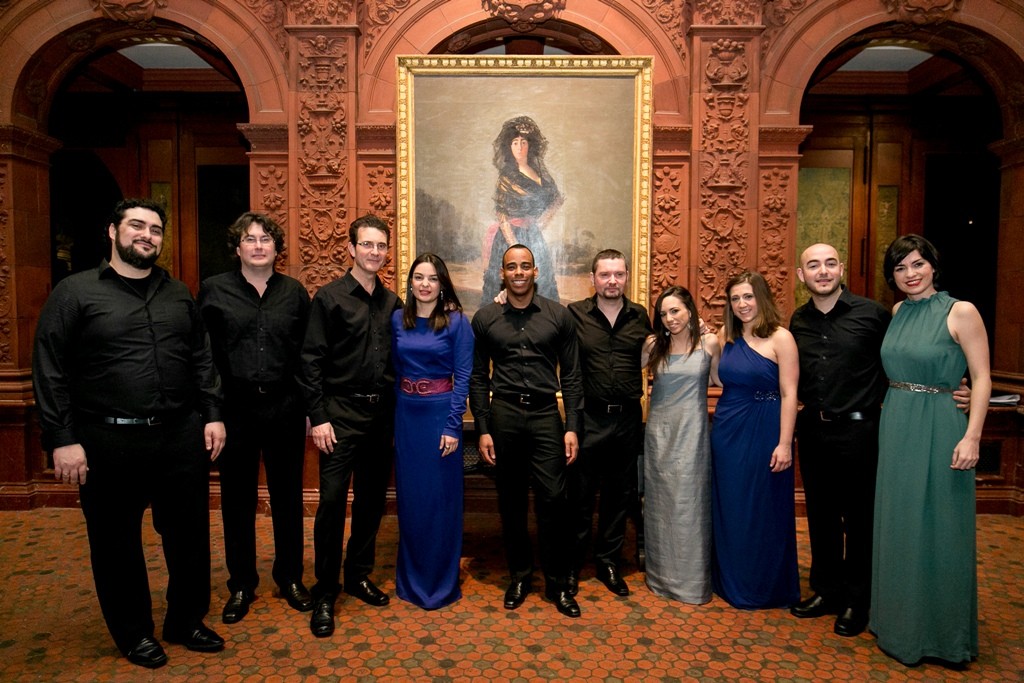 They have recorded 21 CD for Cantus and Enchiriadis labels. Some of them have got critical acclaim and awards in Spain, France and USA. In September 2002 their recording of the Tomás Luis de Victoria Officium Defunctorum was awarded as the “Best renaissance music CD” in CD Compact magazine. It was also chosen for the Spanish newspaper “El País” classical music collection.

In 2005 they performed in scenic version Sabastián Durón´s zarzuela: “Salir el Amor del Mundo” together with the orchestra Civitas Harmoniae.

In August 2007 they published the first World recording of the complete Villanescas Espirituales from Francisco de Guerrero. In February 2010 was published their recording of Tomás Luis de Victoria´s “18 Responsorios de Tinieblas”, first of a series of projects focused on commemorate on 2011, the 4th Century of the death of the composer.

Raúl Mallavibarrena (Oviedo, 1970) started his studies in music with his father Juan Bautista Mallavibarrena. Specialized in the repertoire of XV to XVIII Centuries, he is founder and conductor of Musica Ficta and the Label Enchiriadis. He has conducted concerts in some of the more important festivals in Spain, and in some countries in Europe, North of Africa, Middle East, South America, USA and Japan with repertoire from Middle Age music to “oratorios” from Monteverdi, Haendel and Bach, baroque zarzuelas, cantatas and operas from Vivaldi, to a wide European Renaissance repertoire. In December 2009 he conducted Haendel´s Mesiah with the Orquesta Filarmónica de Málaga. In autum 2013 conducted Purcell´s Dido and Eneas. His records include 17 records as Musical Conductor and more than 30 as a producer. He is frequently invited to teach courses and lectures in universities (Valencia, Málaga, Castilla-León, Autónoma de Madrid, Universidad de los Andes-Colombia) and specialized centres, and to collaborate with the Teatro Real de Madrid.

Music for the Holy Week

As the Holy Week approaches, the Zaragoza Philharmonic Society gave its corporate partners a performance of Tomás Luis de Victoria’s “Officium Hebdomadae Sanctae (Office for Holy Week)” ie. “Tenebrae Responsories”, divided into the three sections corresponding to Thursday, Good Friday and Saturday. These compositions were sung before dawn on those days when darkness prevailed in the altars and naves of the churches, in the early seventeenth century. The ten voices of the Musica Ficta Ensemble directed by Raul Mallavibarrena, took on the initial vocal tract of the six that made up Thursday’s section with perfect harmonization and mix.

The bar of the second, “Judas mercator pessimus” was spine-chilling, performed by a trio of bass, tenor and alto, it dramatically emphasized the betrayal episode. The texts of the Old and New Testaments alluding to the Passion of Christ created a unique atmosphere that, through the melodic beauty and rhythmic contrasts, provided very dramatic effects.

On Thursday, after finalizing the responsories, the director explained with eloquent words the uniqueness of the work, noting the plot process, the dramatic spirit and pessimistic message that underlies the entire composition.

The titles of Friday’s responsories which followed, display violence as a fundamental element of expression, alluding to thieves, darkness, betrayal, crucifixion, agony and tears. The overwhelming oppressive message of texts, wrapped in a conceptually drastic music, were conveyed by the singers with well achieved rhythmic inflections and breaks.

In the third section, the responsories for Saturday kept the austere spirit, but mellowed in part by the expectations of the resurrection of Christ. The music moved from the previous radical drama into a glimmer of peace, less melodic peaks and a smoother and calmer pace. The interpreters conveyed that spirit well.

Two short pieces of Victoria were the bonus, the first of them the famous “Ave Maria” attributed to the composer, although it is actually an anonymous work.

Music of the Spains

To commemorate the V Centenary of The Laws of Burgos, the National Centre for the Dissemination of Music (CNDM) organized a concert featuring the Musica Ficta and Fontenagra Ensembles, with Raul Mallavibarrena as expert director, at the Courtyard of la Casa del Cordón in Burgos.  They performed the "Hispaniarum et India rum" program, with 12 well combined singers, with quality pitch, clear interpretation, and good diction, in Excelente Guerrero: Quasi stella matutina, imitative balance and beauty and fluid phrasing in a green and flowery meadow; Versa est in luctum, of A. Lobo, was moving; Taedet animam meam, of Victoria, ascetic; precise rhythm in Xicochi of G. Fernández. The cornetto, high sackbuts, tenor, bass and bassoon, fine instrumentalists, dubbed voices in Simile est regnum of Morales, and O quam gloriosum est regnum of Victoria; solo in the anonymous work Puestas están frente a frente; acted in different groups such as in Philippus Rex Hispaniae, Kyrie of Escobedo, in the delicate Victoria O lux est decus Hispaniae 2 sopranos, Salve Regina of Ortiz of various verses is interesting; El gozoso Al Resplandor de una estrella of Guerrero, and the must adds, su Todo quanto pudo dar and the Quechua anonymous byssate Hanaqpachap cussicuinin, closing the beautiful concert.

The last echoes of the tune come back, come back, ship, stop your prow, were dying down when in the distance of the night the mermaid of the Azamara cruise ship was heard saying goodbye to the city, in a very Baroque unexpected and poetic play of contrasts. A nice way to close the series of concerts that  this summer has brought back the beautiful wordplay of love and heartbrakd of the Hispanic Baroque, so refined and yet so linked to the popular roots, as Mallavibarrena well stated in one of his explanations.

It was a brilliant closing to this sample of human and divine tunes, songs and dances, as it was a luxury to have en ensemble of the category of Musica Ficta, even if it was in a chamber version. This music is usually played with guitar accompaniment, but Musica Ficta wanted to bring new colors and sounds into the songs using a harpsichord and a violin. Mallavibarrena’s harpsichord is oriented more towards the courtier environments in which these compositions were born, opposite to the popular character of the guitar. On the other hand, Tur Bonet’s violin, reinforcing the bass, doubling the voice or establishing effective counter lines, tinged with new colors the notes often heard on other versions. The violinist exhibited the great quality of her performances in interpretations clearly created for her instrument, such as the sonata Castello or the brilliant accompaniment to the song Ay que me abraso de Durón, which produced a beautiful sound and a surprising range of embellishments and agility.

But nothing would of have been the same without the voice of Rocío de Frutos, perfectly accommodated the style and expressive rhetoric of this music. With a clear voice that allowed to perfectly understand the culterana lyrics, a controlled and flexible sound, she strictly used the proper accents for the keywords in each poem, like "suspiro" (Durón), "detén" or "tormentas" (anonymous), without losing the sense of rhythmic alternations (ternary / binary).