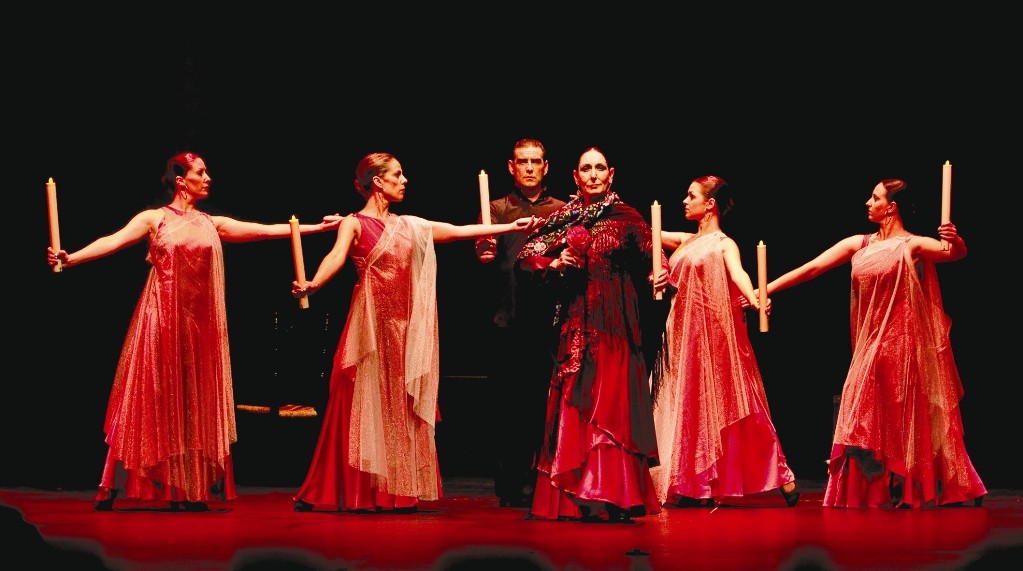 Since her company began, Julia Grecos has created three original works in all of the aspects of their content: Story, choreography and music. Now she offers a new work, “Flamenco de Cristal”.

With her elegant and profound staging, and her original choreographies, she creates vignettes of times passed and pays tribute to indelible personalities who have been imprinted in her heart, in her life. Their memory is as strong, and fragile, as glass…

“A different way to See and Feel Flamenco”

Dancer and choreographer, she was awarded the Pedro del Río Prize for her professional career in Spanish dance in April 2008, by Teatres de la Generalitat Valenciana (Valencian Government).

In June 2010 she dances the "Vida Breve" for the Inauguration of the Superior Conservatory of Music "Joaquín Rodrigo" of Valencia, presided by Her Majesty Queen Sofía of Spain.

She has worked in the flamenco tablao, El Colmao in Valencia, and with many  companies in Spain and abroad. Among these is the Company of Rafael Aguilar. Throughout her career she has worked many times on television. One especially notable appearances as soloist was for the programme, “ESPECIAL FALLAS 1994” on TVE International Spanish Television with an audience 300 million spectators.

For eight seasons she danced and did the choreography for the productions of Los Veranos de la Villa de Madrid on the prestigious stages of the Teatro Albeniz, La Corrala and El Centro Cultural de la Villa. She has colaborated as choreographer with many directors that include Manuel Canseco y Antonio Díaz Zamora. She did the choreography for the production “MARÍA DE LA O” with Silvia Pantoja, directed by Joaquín Vida whose premiere performance took place at the Teatro Albéniz in Madrid.

She worked with Lindsay Kemp in the productin Duende, which narrates the life of the celebrated poet from Granada, Federico García Lorca, as guest soloist and choreographer for a six month tour of Italy.

She has given numerous courses and master classes. In 1995 she was invited to give a Master Class, within the flamenco programme, at the YWCA in New York.

En 1993 danced as guest artist in the Throne Room in Valencia with the band of the Maestrazgo. In 1996 she danced with the Marine Band in the Cultural Centre of the City of  Madrid. Both bands were conducted by Bernardo Adam Ferrero. She performed the dances of  “LA VIDA BREVE” with the Symphony Orchestra of Valencia in the Palau de la Música, under the direction of the conductor Manuel Galduf.

En 1995 she formed her own company with which she opened the IV FLAMENCO FESTIVAL in the Palau de la Música with an original production created by her called, con una obra creada por ella, “EMOCIONES FLAMENCAS”. She received praise from both the public and the critics. Her original style is personal and moving while conserving the purism of the dances in her interpretations. Her choreographies create an unmistakeable atmosphere that immerses the audience in a profound theme that is transmitted with movement, footwork and flamenco music interpreted with singing and guitar.

“EMOCIONES FLAMENCAS” was contracted by the Teatro Rialto and was nominated for the SCENIC ARTS PRIZE OF THE VALENCIAN GOVERNMENT in the category of BEST DANCE PRODUCTION.

She performed and did the choreography the show “CANCIÓN CON REFLEJO” (tribute to Federico García Lorca) with Paco Rabal and Enrique Morente, under the musical direction of Bernardo Adam Ferrero, author of the production. It premiered at the Teatro Principal in Valencia, and afterwards toured all of Spain.

In November of 2000 she created the work, “LUNA... LUNA FLAMENCA”. It had its premiere performance in the VII FLAMENCO FESTIVAL in the Palau de la Música of Valencia.

In January of 2001 she was invited to do the choreography for the “EXALTACION DE LA FALLERA MAYOR DE VALENCIA”, a televised event that presents the principal person of the celebrated Fallas of Valencia, in the Palau de la Música. En 2004 she was invited by the Cultural Council to dance for the inauguration of an exhibition at the IVAM (Modern Art Museum).

At present she is professor of Flamenco Dance and is Director at the Superior Dance Conservatory of Valencia. She combines her teaching with the performances of her company.

Since the creation of her company, her slogan has been, “A different way to See and Feel flamenco”.