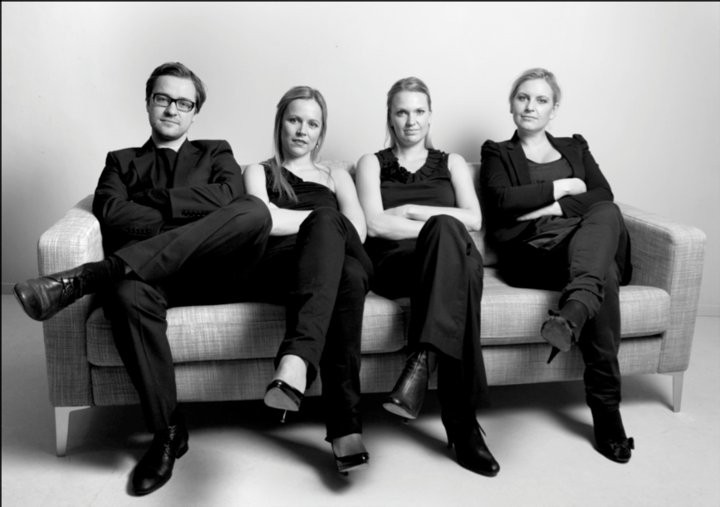 The Nidaros String Quartet was formed in October 2003 and is made up of 4 musicians from Trondheim in Norway, Ola Lindseth, Elisabeth Rolfsjord Uddu, Ragnhild Torp og Synnøve Reite Volden. The quartet has finished  2 years postgraduate study in chamber music with the Royal Academy of music in Stockholm where their teachers have included Ola Karlsson (the solo cellist in the Swedish Radio Symphony Orchestra), Tale Olsson (a previous  Concert Master with the Norrköping Symphony Orchestra and the Tale Quartet) and Mats Zetterquist (leader of the Z- quartet). In addition the Nidaros String Quartet has also taken part of several Masterclasses with artists such as Andrew Manze Tsuyoshy Tsutsumi, Arve Tellefsen, Levon Chillingirian, Jan Erik Gustafsson as well as the Kronos Quartet, Vertavo Quartet and  the Maggini Quartet.

In  2004 the Nidaros String Quartet was chosen to perform before Sofia Gubaidulina her String Quartet No 3 at the Trondheim International Chamber Music Festival. This experience left a profound impression on the Quartet, and continues to influence the works the Quartet chooses to perform as well as the way in which they perform them. In January 2005 the Quartet was the solo ensemble in the Royal Acadamy of Music In Stockholm´s performance of Elgars ”Introduction and Allegro”.

The Nidaros String Quartet is an ensemble with awealth and depth of musical expression and versatility which enjoys exploring and performing  new genres. They have toured throughout Norway with the Norwegian actor/singer Herborg Kråkevik, and in Octoberthey received outstanding critics for their collabration with the folk singer/songwriter Odd Nordstoga on his project ”Pilgrem” which was performed at the two largest classical festivals in Norway, the Bergen International Festival and St. Olav Festival in Trondheim. Theyb also regularly collaborate with the celebrated Norwegian singer Sissel Kyrkjebø and have toured with her to the USA, Russia and Scandinavia.

The Quartet has been invited to perform at many of Norway and Sweden´s most important music festivals including the Kibneb Festival, Musikk på Slottet in Sweden and the Umeå Chamber Music Festival, where they performed works by, and worked with Marc Anthony Turnage.

For Grieg´s anniversary in 2007 the ensemble performed Grieg´s g minor Quartet with great success including performances at rhe Grieg 07 Festival at Nybrokajen 11 in Stockholm and the Carlskrona Chamber Music Festival, after this performance the Blekinge Läns Tidning newspaper wrote ”The Nidaros String Quartet´s performance of Grieg was the chamber music festivals high point for me... The technical challenges of  this intensive piece wasa triumph for the ensemble.”

2007 the Nidaros String Quartet toured Spain for 2 weeks, sponsored by the Norwegian Embassy in Madrid and had another tour in the Autumn of 2008.

In 2011 the Quartet established a chamber music series in four parts in Trondheim. Standard quartet reportoire combined with newer music written for quartet. The 2011 series was broadcasted at Norwegian Broadcasting NRK.

In 2008 the Nidaros String Quartet won the title Ensemble of the Year as part of the Olaf T. Ranums Chamber Music Price, awarded by the Trondheim Chamber Music Association.

Nidaros String Quartet recieved funds for ensembles from The Norwegian Arts Council in 2010 and 2011.