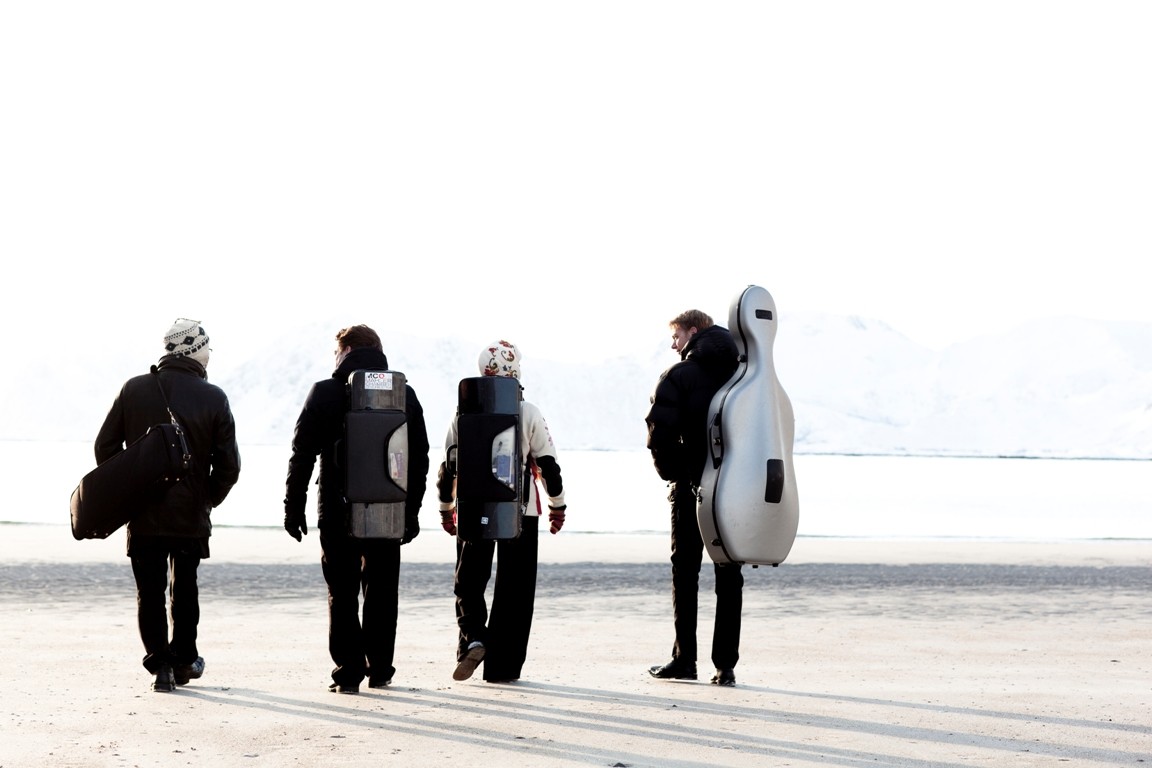 Formed under the midnight sun in Lofoten in 2006, the Engegård Quartet rapidly became one of the most sought after ensembles in Norway, performing at the Bergen Festival and the Oslo Chamber Music Festival in their very first season. Their debut CD was hailed as Norway’s best classical release of 2008 by the prominent music critic, Kjell Hillveg. The same CD garnered international praise too; ”the playing is breath-taking” (The Strad), ”First rate quartet playing” (International Record Review). Their second release won the “Supersonic Award” in the music magazine Pizzicato. The Engegård Quartet has also released a CD of the complete works for quartet by Catharinus Elling with Simax.

The Engegård Quartet has attracted international recognition with their brave and fresh interpretations of the classical repertoire, combined with an irresistible inclination to be true to their Scandinavian roots, inspiring both Nordic programs and partnerships. Their schedule has taken the Engegård Quartet in recent years to the Mozarteum in Salzburg, Luxembourg Philharmonic, Stockholm Grünewaldsalen, Dublin City Hall, Prague Rudolfinum, Copenhagen Radio Koncertsalen, Sibelius Academy in Helsinki, Gothenburg Music Conservatory, Delft Chamber Music Festival, SoNoRo Festival in Bucharest, Kulturwald in Germany, Heidelberg Streichquartettfest and Lenzburgiade in Switzerland.

According to the critics, the Engegård Quartet has played ”Elegantly and expressively” in Gothenburg, are “ A masterful ensemble!” in Luxembourg, and in Dublin ”the audience roared their approval!”

Arvid Engegård is the creator and Artistic Director of the Lofoten International Chamber Music Festival, an intimate chamber music experience in spectacular scenery. A regular fixture in the Engegård Quartet’s summer, “the world’s most beautiful festival” is a meeting place for some of the most eminent musicians.

Juliet Jopling is the creator and artistic director of Oslo Quartet Series, an international quartet series with partners in Bodø and Trondheim, which is really putting the string quartet on the map in Norway.

The Engegård Quartet is supported by the Norwegian Arts Council and Lene Holding.

Concert with the Engegård Quartet and Nils Økland,  “Mysterious Norway”

“It’s a dangerous world out there… you might just bump into some wolves…”, was how one of the works was introduced by Juliet Jopling, the only lady in the Norwegian Engegård Quartet, with a smile. And truly, we heard them. While the two violinists (Arvid Engegård and Alex Robson) conjured up the mysterious and misty atmosphere of the wilderness, the cellist (Jan Clemens Carlsen) and violist (Juliet Jopling) created wolf-howls that were surprisingly realistic and led the audience into another world – namely, the secretive North. The concert on Wednesday evening (12th March) in Universität Mozarteum´s Solitär Series really lived up to its title: ” Mysterious Norway. ”

This extraordinary quartet, named after the first violinist Arvid Engegård, led the audience into the unique world of Norwegian classical and folk music, with intimacy and mystique playing an ever recurring role.

The concert opened with Johan Svendsen´s Romance. Although not on the programme, we were assured by Juliet Jopling that no evening of Norwegian music was complete without it. Through their heartfelt playing it was soon apparent that the Engegård Quartet were fully immersed in the music, and identified completely with it´s musical language.

The evening’s special guest, Nils Økland, was then presented with his equally special instrument, the Harding fiddle. In order for the audience to hear the instrument´s unique sound in it´s natural glory and as unadorned as possible, Nils performed first a solo (accompanied only by his own rhythmic foot tapping), after a while gently rounding off while disappearing towards the door, to let the official programme begin. The main works on the programme were Grieg’s String Quartet in g minor and Johan Kvandal´s Quintet for Harding fiddle and string quartet.

This ensemble´s variety in expression was incredible. Sometimes serious, sometimes playful, from riveting and tumultuous, to soothing and longing.  The Engegård Quartet shook their audience with the intensity of their playing, but also produced sounds that were evanescent as steam before disappearing into infinity.

The evening´s second part offered many surprises and was simply announced in the programme as “Norwegian folk music.” But here too the ensemble delighted their audience with their versatile and dynamic musicianship. Whether they were sitting or standing, with or without the Harding fiddle, the audience was taken through the whole spectrum of Norwegian traditional music. Their repertoire included a Polka, a Finnish tango, and a Joik Suite from Lapland. The musicians played everything by heart, standing, playing straight to their audience. The immediacy of the dancing rhythms didn´t only get the musicians going but created a light and happy atmosphere in the audience. Their enthusiastic applause was finally rewarded with an encore, which with it´s longing, slow motive, created a wonderfully dreamy atmosphere to end off the evening. Colourful, multifaceted, rhythmic, mysterious – that´s the sound of Norway!

The first CD by the Engegårdkvartetten reveals an ensemble at the absolute top of its game. It opens with one of the most refreshing Haydn performances I have heard in years: a model of good taste but also fizzing with energy and life – and that unbearably moving Largo is delivered with heart-breaking poise (it’s not often I sit at my desk with tears rolling down my cheeks). Leif Solberg (f. 1914) came to wider public notice only in 1996 when a CD of his organ music revealed that Norway had been ignoring one of its finest composers. In the 12 years since then, his Symphony (1951–52) got its first professional performance in 1998 and one of his choral pieces was recorded in a transcription for strings – and that’s all. Shame on Norway’s musicians, and bravo to the Engegårds for allowing us (and the composer) to hear this first recording of his only string quartet, composed in 1945. It is a sparkling gem of a work: cast in a Classical mould and steeped in the heritage of Grieg and Norwegian folk-music more generally, it would be a concert favourite if only audiences got a chance to hear it.
The disc closes with an account of the Grieg Quartet which has a raw power that made me sit up in astonishment. That brief, broad opening opens a wild ride of thrilling impetuosity where every accentuation, every dynamic contrast, every texture is made to tell. It’s also a reading which takes the work closer to its Norwegian roots than any performance I know: just listen to the evocations of hardingfele in the trio of the Intermezzo. The Grieg Quartet is often denigrated for not being especially quartettmässig; the Engegårds play with a passion which destined all such criticism for the dustbin. Quite simply, this is one of great recorded performances: Furtwängler’s Tristan, Klemperer’s Missa solemnis, the Busch Quartet’s Op. 131 – it really is that good. Morten Lindberg’s label 2L presents the entire thing in recorded sound of stunning immediacy. This is one CD you should not miss.
Martin Anderson
Sept 2008

Excellent quartets are hard to find but the Engegård Quartet really showed what they are worth in their debut concert in Göteborg…
Their virtuosic playing was impressive, and the physical sensation of the harmonic tension was tangible.
Magnus Haglund
13.10.2010

Their programme was an enormous challenge both technically and musically but we were in the best of hands with the Engegård Quartet.
Knud Erik Kengen
11.3.2010

Honesty and equilibrium to the fore as the Beethoven survey continues

The most interesting angle here is the varied instrumental staging and microphone placements. For the Beethoven and Bartók quartets, the chosen layout finds the viola and cello flanked either side (left and right) by the first and second violins, the Bartók responding to the slightly wider gaps between the instruments. The Nordheim is a “surround-sound” production, with the cello and viola to the fore, and the two violins to the rear. Listening conventionally, it’s the Beethoven that makes the strongest impression, with vivid antiphonal effects, especially in the first movement and the Scherzo.The performance is best where the adrenalin rush is at its most intense, whereas the Bartók Third is especially strong in the glissando-dominated opening and similarly atmospheric episode just prior to the coda. The faster, more rhythmically complex music tends to blur a little, at least in comparison with, say, the Véghs, the Hagens and the Juilliards. Arne Nordheim considers his 1956 his true “Op 1” and it is certainly auspicious, the improvisational first movement and mystical finale flanking a more urgent Intermezzo. Nordheim’s Quartet is a powerful and involving piece and repays more than a single visit, though I would like to hear it in context with other Nordheim works. This particular programme approximates a memorable, one-off concert, and as such can be recommended.

“Intimate Letters” and the “Kreutzer Sonate”

String Quartet in b minor

A Tale of Lead and Light (Engegård Quartet´s first commission)